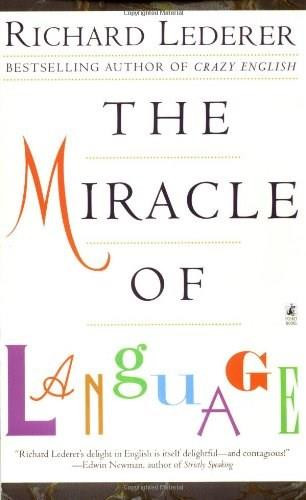 Bulk Discounts for The Miracle of Language

Master verbalist Richard Lederer, America's "Wizard of Idiom" (Denver Post), presents a love letter to the most glorious of human achievements...
Welcome to Richard Lederer's beguiling celebration of language -- of our ability to utter, write, and receive words. No purists need stop here. Mr. Lederer is no linguistic sheriff organizing posses to hunt down and string up language offenders. Instead, join him "In Praise of English," and discover why the tongue described in Shakespeare's day as "of small reatch" has become the most widely spoken language in history:

He also points out the pitfalls and pratfalls of English. If a man mans a station, what does a woman do? In the "The Department of Redundancy Department," "Is English Prejudiced?" and other essays, Richard Lederer urges us not to abandon that which makes us human: the capacity to distinguish, discriminate, compare, and evaluate.