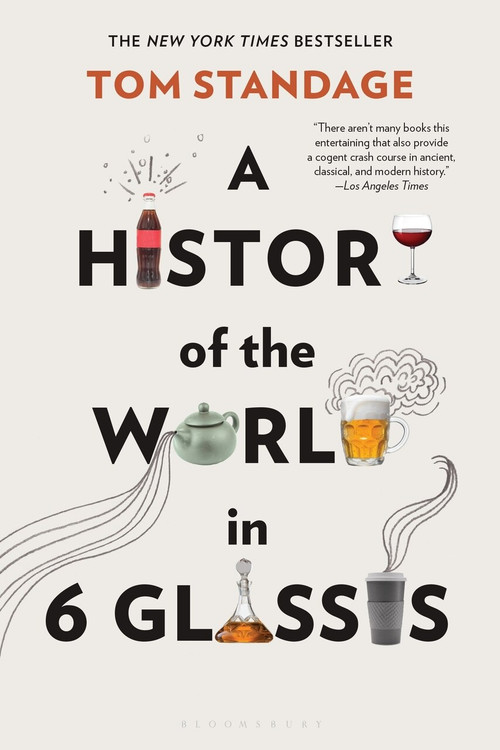 Bulk Discounts for A History of the World in 6 Glasses

From beer to Coca-Cola, the six drinks that have helped shape human history.

Throughout human history, certain drinks have done much more than just quench thirst. As Tom Standage relates with authority and charm, six of them have had a surprisingly pervasive influence on the course of history, becoming the defining drink during a pivotal historical period.

A History of the World in 6 Glasses tells the story of humanity from the Stone Age to the 21st century through the lens of beer, wine, spirits, coffee, tea, and cola. Beer was first made in the Fertile Crescent and by 3000 B.C.E. was so important to Mesopotamia and Egypt that it was used to pay wages. In ancient Greece wine became the main export of her vast seaborne trade, helping spread Greek culture abroad. Spirits such as brandy and rum fueled the Age of Exploration, fortifying seamen on long voyages and oiling the pernicious slave trade. Although coffee originated in the Arab world, it stoked revolutionary thought in Europe during the Age of Reason, when coffeehouses became centers of intellectual exchange. And hundreds of years after the Chinese began drinking tea, it became especially popular in Britain, with far-reaching effects on British foreign policy. Finally, though carbonated drinks were invented in 18th-century Europe they became a 20th-century phenomenon, and Coca-Cola in particular is the leading symbol of globalization.

For Tom Standage, each drink is a kind of technology, a catalyst for advancing culture by which he demonstrates the intricate interplay of different civilizations. You may never look at your favorite drink the same way again.