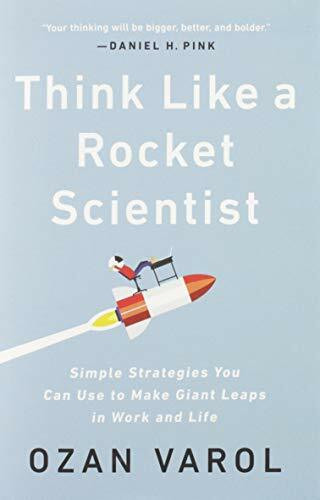 A veteran of the Mars Rover project reveals the habits, ideas, and strategies that will help your once-impossible ambitions achieve liftoff.

We're experiencing a second age of spaceflight, and the renaissance of rocket science is captivating the world. Movies and television shows set in this sphere consistently top the charts, and millions tune in to watch SpaceX launches. Although we glamorize rocket science, we assume that it's beyond comprehension by mere mortals who don't have a special kind of genius baked into their DNA (hence the common saying, "It's not rocket science").
Yet while the complex math and scientific details of building rockets may be out of our reach, the principles that guide the discipline don't have to be. In this mind-expanding book, Ozan Varol, an actual rocket scientist, shows how the strategies that built the Apollo 11 can help you achieve your own moon shot. Think Like a Rocket Scientist teaches you how to attack previously unsolved problems, how to overcome everyday obstacles to grand ambitions, and much more.
A deeply knowledgeable scholar with a breezy, contrarian voice, Varol inspires us not only to dream big--but to achieve those dreams too.