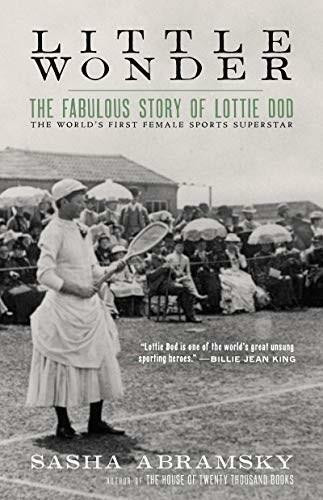 "Lottie Dod is one of the world's great unsung sporting heroes. There wasn't a glass ceiling she didn't succeed in breaking, and in Little Wonder, Sasha Abramsky takes readers on an amazing journey across continents and decades as she shattered records and destroyed stereotypes along the way."
--Billie Jean King

"It's so important to remember the past champions, especially the women who tend to be forgotten in the history books."
--Martina Navratilova

Little Wonder: The Fabulous Story of Lottie Dod, the World's First Female Sports Superstar is a biography of a truly extraordinary sports figure who blazed trails of glory in the last decades of the nineteenth and first decade of the twentieth centuries. Dod was the third woman to win the Ladies' Championships at the Wimbledon tennis tournament. She did so for the first time in 1887, at the ludicrously young age of fifteen. She remains today the youngest person ever to have won a singles trophy in what would come to be known as the big-four Grand Slam tennis tournaments.

Dod won Wimbledon five times, grew bored with competitive tennis, and moved on to myriad other sports. She became the world's leading female ice skater and tobogganist, perfecting her talents in St. Moritz, Switzerland; befriended Elizabeth Main, the most skilled female mountaineer of the age, and joined her in summiting many of Switzerland's and Norway's most difficult mountains; became an endurance bicyclist; played hockey for England; won the British ladies' golf championship in 1904; and finally, in 1908, took the Olympic silver medal in archery in the London Olympics.

In her time, she had a huge following, with fans coming out by the thousands to cheer her on. She was feted by the media, and repeatedly profiled by the top sports journals of the day. Had Dod lived in a different age, this fame would have followed her throughout her life. But Dod's years of glory occurred just before the rise of cinema, radio, and other electronic media. By the outset of World War I, she was largely a forgotten figure; she died alone and without fanfare in 1960.

Little Wonder brings this remarkable woman's story to life, contextualizing it against a backdrop of rapid social change and tectonic shifts in the status of women in society. Dod was born into a world in which even upper-class women such as herself could not vote, were restricted in owning property, and were assumed to be fragile and delicate. True, the monarch was a queen, Victoria; but Victoria's reign was hardly a bastion of feminist progress. Women of Lottie Dod's class were expected not to work and to definitely get married. Dod turned that equation on its head; she never married and never had children, instead putting heart and soul into training to be the best athlete she could possibly be.

Dod was one of the pioneers who paved the way for the likes of Billie Jean King, Serena Williams, and the top female athletes of today. She accepted no limits, no glass ceilings, believed she could compete with the top men in whatever sport she set her sights on, and always refused to compromise.