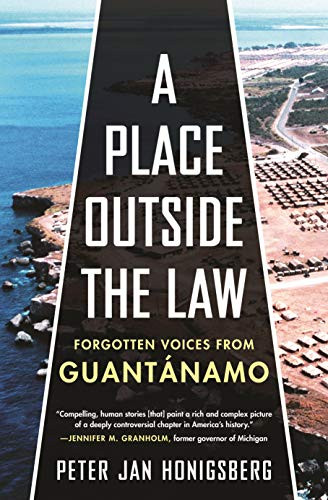 Since the September 11th attacks, approximately 780 men of Arab descent have been detained at Guantanamo Bay as part of America's ill-fated War on Terror. 40 prisoners remained. Many of them have been tortured, and they will likely die there without receiving a trial.

Through the stories Honigsberg captures, he introduces readers to an unforgettable cast of characters. There are the many alleged operatives in Guantanamo who were purchased by the United States for ransom from Afghan and Pakistani soldiers. Brandon Neely, a prison guard who processed the first group of suspected operatives to arrive in Cuba. Matt Diaz, a Navy whistleblower who covertly released the names of 500 detainees by sending them in a greeting card to a lawyer in New York. Carol Rosenberg, a journalist who has committed the past 17 years of her career to documenting life at Guantanamo. And many, many more, including Damien Corsetti, an interrogator who came to be known as the "King of Torture."

In startling, aching prose, A Place Outside the Law shines a light on these untold stories, and through them, provides a powerful testament to the consequences of unchecked state power.